skip to main | skip to sidebar
As of October 18, 2013, Pie and Beer has moved!
Click here to go to the new address, or stay here to read posts from the archives.

A New Pie and Beer

I'm finally getting the new blog up and running (I have no idea what I'm doing), so head over there for new posts, pictures, recipes, and new-look fun. I had to delete all the old posts from the WordPress version because the wonkiness was crazy-making, but you can still jump back here if you want to browse through the P&B archives. If you're seeing this on a reader of some sort, be sure to change the address so you don't miss any of the action (ha) at pieandbeer.wordpress.com.
Posted by Liana Krissoff at 11:43 AM No comments:

Well, folks, it's about time this blog got a new look. I'm working on getting it all gussied up, so stay tuned for the vastly improved, prettier, hipper P&B, coming in a couple weeks to screens right in front of you!
Posted by Liana Krissoff at 7:51 AM 3 comments:

Letting Go and Catching Up

Three weeks ago I turned the manuscript for my next book over to my publisher. As I wait, with no small amount of dread, for the first round of edits to come back, I thought I'd post a few pictures here, with some nattering commentary to go with them—you know, write a blog post. 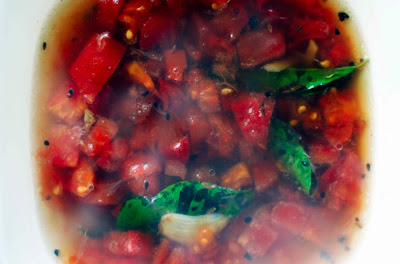 The book I was working on is a vegetable cookbook, and even as I was hitting "Send" I wasn't completely convinced that it was, in fact, finished. There are always more recipes I want to include, and this would be especially true of a vegetable book, wouldn't it? Can't you easily come up with something even better? The last recipe I developed for this book, though, was a comfort to me in a couple ways: This rough-hewn version of South Indian–style pepper water might actually be the best dish in the book, and that thought made it a bit easier to tell myself I'd reached an end point of sorts. And that afternoon, sitting down by myself at our bright red table with the winter sun streaming in the window, with a bowl of steaming, tamarind-sour, spice-fragrant broth in front of me, I truly wished that every future reader of this book could be sitting there with me, sharing and enjoying this meal with me. I guess that's why I want to keep learning about food and writing about what I learn. 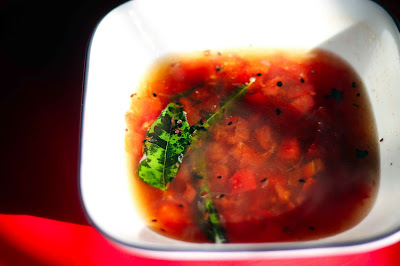 The morning after "Send," Derek and Thalia and I headed out on a road trip. As one does. We crossed from Nebraska into Kansas in midmorning, which was probably the ideal time of day to be driving through the Flint Hills in the northeastern quadrant of the state. We hit Dodge City by midday, and from that point west, we realized later, we were essentially following the Cimarron, or southerly, route of the Santa Fe Trail. 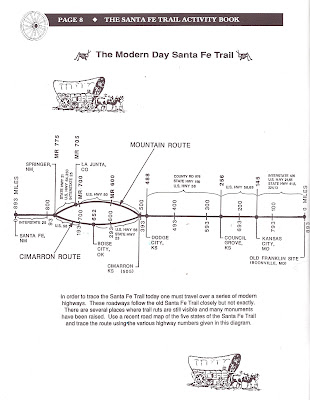 From a surprisingly hard-core kids' book we picked up for Thalia.

For the casual traveler, Kansas west of Dodge City is, shall we say, difficult to love, not a part of the country in which to linger. But eventually we found ourselves on small roads in the Oklahoma panhandle, which was rougher and less cultivated, more classically beautiful, more pull-over-worthy. 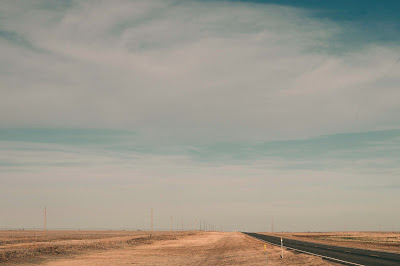 Kansas was less visually interesting than this.

We pulled into Clayton, New Mexico, our town for the night, just before sunset. 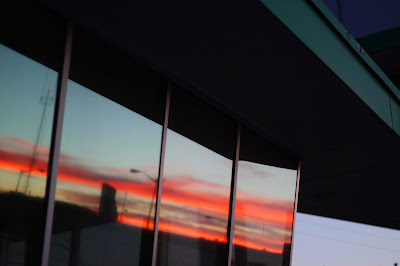 For the next few days we tooled around Derek's old stomping grounds in Albuquerque and up toward Santa Fe. We stayed at a lovely lavender farm just at the edge of Albuquerque that seemed to have been made with us in mind. There were goats, chickens, guinea hens, a milk cow, and a sweet "farm shop" just outside our room. 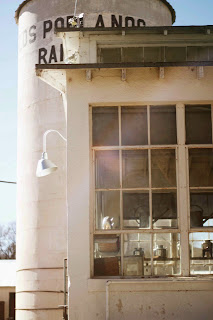 The lights of the city and on top of the Sandia range behind it were especially beautiful from the lavender field. 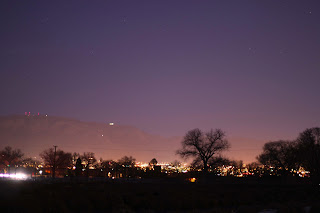 We've been living in Nebraska, which as you might know is sort of flat, for about eight months now, so being in a place where the topographical lines are crowded closer together was especially refreshing. 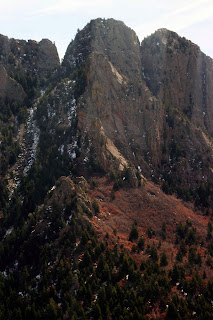 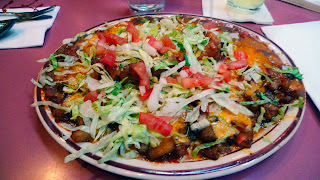 And it was delicious.

On our way home we followed much of the northern, Mountain route of the Santa Fe Trail and spent the night in La Junta, Colorado, so we could visit Bent's Old Fort, a place that's held much fascination for Derek since we moved west. The fort has been reconstructed of adobe (real adobe) on what is thought to be the original foundation footprint, within sight of the Arkansas River, the old boundary between the United States and Mexico. We were very proud of Thalia when the reenactor asked her if she knew what kind of fort it was and she answered, correctly, "A trading fort!" 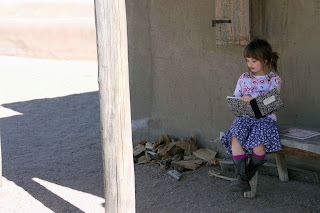 In the spirit of the place, at the nearby Safeway I traded some American dollars for these: 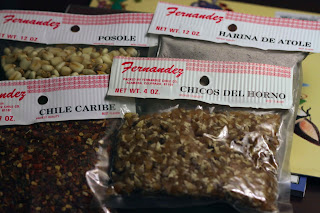 When we got home to Lincoln, it was Thalia's seventh birthday, and I made a horrendous pink strawberry cake that we enjoyed very much. 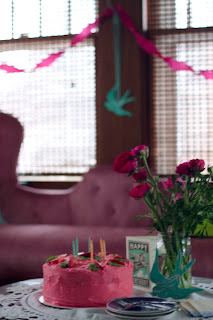 Since moving to Nebraska, I've been lucky to have made the acquaintance of the thoughtful Lincolnite writers of the blog Foodpocalypse, tagline: "farm to table and all the ugliness in between." They invited me to do a guest post discussing two New York Times cookbooks, and I encourage you to check it out—there are a couple of good recipes toward the end, if you get that far (it's longer than I thought). 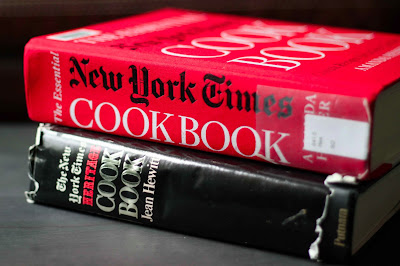 If you're in Lincoln, first of all, please introduce yourself! Second, you might also be interested in the other little blog I started up, focusing on local restaurant reviews, LNK Eats. There aren't many reviews up yet, but I'm working on it. 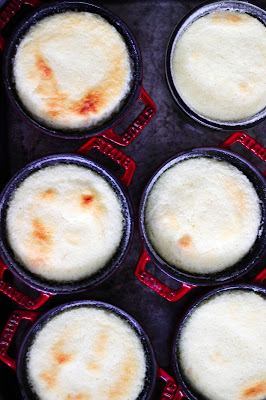 We're behind the Butlers at Step into My Thimble, who have already posted week 5's reviews from Dubai, featuring more Bahlsen.

So we actually did choose two different cookies last week, but forgot to take a picture of the packages. They weren't cookies I'd like to buy again, so here's a brief review of each: Carr's Ginger Lemon Creme cookies (these were my choice but they were way too sweet, and I actually didn't care for the spicy ginger with wan lemon flavor) and Pepperidge Farm Milano Melts (the whole point of a Milano cookie is the flavor that goes with the chocolate—the mint or orange, for example—and these just have chocolate in the center; in fact, if you closed your eyes, these tasted a lot like a Chips Ahoy from a vending machine; also the faux "melted" aspect of the filling was a little disconcerting to me—i.e., how'd they do that?). 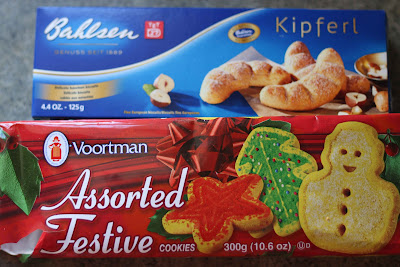 Up top we have my choice, Bahlsen Kipferl, which are "delicate" hazelnut cookies.

My review: They are delicate: crisp and light, with a powerful hazelnut flavor (the nuts are ground finely and part of the dough) and a light dusting of granulated sugar. I'm afraid there's not much else to say about them. They're fine, but I don't think I'd buy them again. I think maybe hazelnut, which is so distinctive, needs something equally assertive to go along with it, like, of course, chocolate.

Thalia's pick this week, Voortman Assorted Festive Cookies, is something she's been considering for a while—there's a whole endcap display of Voortman holiday cookies near the meat case where we wait for the butcher to cut our order (one excellent benefit of living in Nebraska is the local dedication to good-quality meat; few of the grocery stores we frequent sell very much meat that's already in packages), so she's had plenty of time to consider which kind to choose. I'm sure she decided on the assortment so that she could legitimately taste all three varieties in a sitting. Smart girl.

Thalia's review: swet with paldrd shogr. wich is the snoeman. [Ed. note: I don't know why she consistently spells the "ow" sound, as in powdered sugar, with "al"; she did this on her spelling test last week: "braln" for brown.]

My review: These taste pretty much exactly as you'd expect, which is kind of the beauty of them.
Posted by Liana Krissoff at 9:30 AM 1 comment:

Vegetarian for a New Generation

Whole Grains for a New Generation 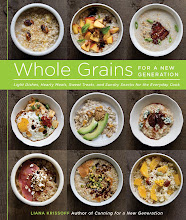 Liana Krissoff
I live in Lincoln, Nebraska, with my husband and our daughter, and our dog, Cooper. I've published four cookbooks, "Secrets of Slow Cooking," "Hot Drinks for Cold Nights," "Canning for a New Generation," and "Whole Grains for a New Generation." My next book, a vegetarian vegetable book, is due out in spring 2014.

A home for Generation Can